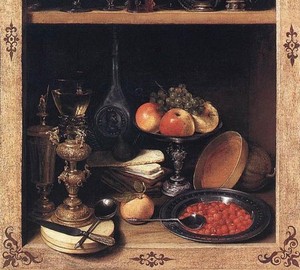 Pantry – Georg Flegel. 1610. Oil on canvas. 92×62
The “cold” by Georg Flegel (1566-1638) is an interesting variety of still life called “deception”, or “thromplay” (from the French “trompe l’oile” – “deception”). The peculiarity of such a picture is that its author is trying to pass off her man-made image as a fragment of the real world. It is possible to correctly perceive the “deception” only in the original: even the best reproduction is not able to convey the fullness of the sensation it creates. This is due to the fact that the desired effect of illusion is usually associated with the location and size of the work, always reproducing the objects depicted in natural size. In addition, so that thromplays look as natural as possible, they are never inserted into the frame.

Georg Flegel learned the art of creating dumplings from the masters of the Dutch still life, who were the first to turn to this genre. Artists used many tricks to make the viewer want to touch the things presented on the canvas. One of them is a picturesque imitation of a niche deep into the wall of the cabinet – and uses Flegel in his work. Its canvas represents a tinted pantry, on two shelves of which drinks are placed in jugs, fruits, bread, dishes and a vase with flowers. The virtuoso illusory manners of the image should have made a person who unexpectedly saw this picture think, two-dimensional painting in front of him or three-dimensional real objects?

Despite the fact that the main task of such works was only to mislead the viewer, they have all the advantages of the still life of the 17th century, including the inherent semantic associations.