Picture of the Kitchen, David Tenirs the Younger 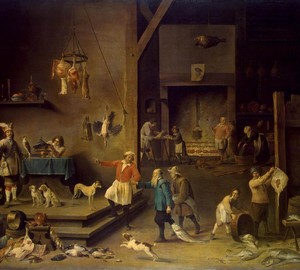 Kitchen – David Tenirs the Younger. 1640s. Oil on canvas. 172.5×237
On the monumental canvas, David Tenirs the Younger introduced himself as a rich nobleman. It is depicted on the left on a stepwise platform, in a smart falconry costume. A falcon sits on his left hand, with his right hand he rests on a cane; hunting dogs are at the feet. A attentive, keenly directed look indicates that the artist carefully studied his reflection in the mirror. A similar model of the face of a painter (with brown eyes, a large nose, the tip of which is slightly pulled up, with a small mustache over the half-open chubby lips and the chin put forward) can be seen in the early subscription “Auto Portrait”. This “Autoportrait”, recently appeared in the art literature, once again confirmed that the en-mite picture undoubtedly depicts Tenirs himself.

The action of the picture occurs, most likely, not in the real, but in the interior invented by the artist. Although various assumptions were made in the literature: either this is the interior of the Tenirs cuisine in the estate “Three Towers” (“De Dry Toren”, or Draytorn Castle), or the image of the kitchen in the palace of Archduke Leopold William. But since the Draytoren Castle in the vicinity of the village of Perk Tenirs acquired much later, in 1662, most researchers are inclined to believe that the palace kitchen of the Archduke is shown on the canvas. However, Tenirs becomes the court artist of Leopold Wilhelm and moves to Brussels only in 1651, and the work was created in 1646. Therefore, it is a composed composition.

As for the plot, the Babin (1989), and after it Klishe (1991) interpret the Hermitage “Kukhnu” as an allegory of four elements. On the canvas of Tenirs, as well as on the engraving of his predecessor Jacques de Gain the Younger (1565-1629), the figure of a falcon with a falcon personifies Air. In order to reveal the subtext of this very genre but character of the figure, the artist places it under the window from which water and light flow. Fire symbolizes the roasting pan on the table, the center of the furnace and the figures of the cook and his assistants depicted nearby. Water is presented in the picture by images of fishermen (in the center and on the right) with fish and marine animals. In the Tenirsian interpretation of the four elements, the figure of the falconer plays a twofold role. In addition to Air, it personifies the element of the Earth – the hunter is surrounded by dogs and bat game, and at his feet are placed all kinds of fruits of the earth (cabbage, roots, apples, etc.). In a similar interpretation, Tenirs used as a source, in addition to the work of Jacques de Gain the Younger (in which the Earth is indicated by the figure of a hunter), the engraving “Earth” by Nicholas de Braip (1571-1656). The latter shows in abundance the attributes of the Earth, similar to the details of the still life on the nerve plane (left) in the “Kitchen” of Tenirs.