Picture of the Three Crucifixes (Golgofa), Rubens, about 1640 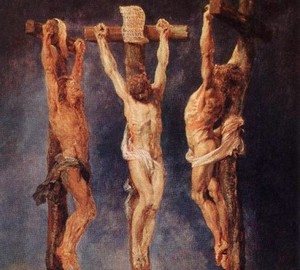 The mysterious, gloomy night scene, illuminated by flashes of torches, is full of movement and dramatic experience. In the Golgofa sketch written by Rubens, confusion and anxiety of the early thing disappeared. The content appears clarified as a high heroic tragedy. Crosses with Christ crucified on them and two robbers rise above the deserted, bare terrain. There are no traditional suites for this, no burning followers of Christ. All earthly ties between three crucified and living people are broken. Christ is already dead, and a strange, flickering, supernatural light pours into his bright, pale, pale body, on the hill of Calvary and on the foggy distance. Rubens makes fantastic lighting a carrier of his experience, following the same path as artists so deeply different from him as Rembrandt and El Greco.