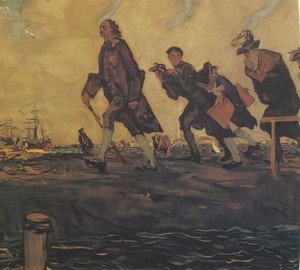 A great reformer steps wide, confidently and firmly on the shaky, imperfection of the embankment. His determination, pressure, energy led centuries-old traditions into a busy movement, entrenched orders, the established life of a multi-million dollar country.

The action of the picture unfolds against the background of the new capital of the Great Empire under construction. On the opposite bank, the needle of the Peter and Paul Cathedral sparkles with gold. The first stone buildings are visible, the signs of the city are obvious. Everything is just beginning here. Instead of the future embankment – an earthen embankment, instead of palaces – the foundations of buildings in scaffolding.

The attention of the viewer is riveted to the figure of the Sovereign. Everything in it symbolizes strength and determination: a firm act, a blush on a windy face, a holding look. From the whole group, he is the only one who does not feel the strength of the wind. The group of accompanying the king emphasizes his exclusivity. The nobles themselves cling to their raincoats, bend before the headwind.

An interesting figure is the king of a batter, carefully carrying a triangle to the sovereign. Who is this man with a non-Slavic appearance? Did Arapa Ibrahim portray the artist? It is not known for certain. It is only clear that in the new Russia it is no longer the origin and antiquity of the genus that affects the career, but the ability and devotion to the idea of renewing the power.

The faces of the courtiers are hidden from the public. The author does not see the need to give them certain individual features.

The first ships of the Russian fleet are very close by. The Admiralty is not ready yet, there are no marinas, ports, but there is the main thing – warships and merchant ships.

A cow drinking water from the Neva is the most important detail. Thus, the author makes us understand that, along with new buildings, the lives of people who came to these shores seriously and for a long time are gradually getting better.

Three gulls soar in the cloud sky, which symbolize the proximity of the sea, to which the new Russia is moving so rapidly.

The color scheme of the picture is poor. It is schematic and simply conveys the atmosphere of a great construction site. But thanks to this restraint, the viewer has the opportunity to concentrate on the artist’s main thought: the changes initiated by the great sovereign are irreversible.