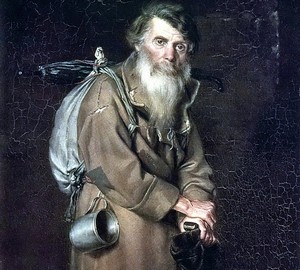 The wanderer in Russia is the embodiment of the biblical “poor in spirit”, by which the “Kingdom of Heaven” is promised. People of this breed have always been treated with respect, some even fear. After the reform of 1861, there were a lot of such wanderers. Among them were those who chose complete freedom, even with absolute poverty.

From the picture looks the old man in old, patched clothes, bast shoes. He has a staff in his hands, and behind his back a duffel bag with all his property.

It is immediately striking that the pathetic gray beard is well-groomed, the hair is neatly combed. Clothing, let and very well-worn, but clean. The look of the hero is full of dignity, wisdom and hopeless sadness. And his posture speaks of independence and self-confidence, no matter what. The artist paid special attention to the hands of his hero.

Behind the hero’s shoulders is a long and difficult life that did not bring him happiness, prosperity, joy. But the desire to enjoy freedom and be dependent only on oneself overpowered all the temptations of the material order.

The artist chooses a dark, neutral background that allows the viewer to focus on the figure of the hero, his amazing look.

It is known that the master wrote a portrait from an old man in whose life he wanted to take part, to arrange him in a shelter. The master was amazed when a wanderer, insulted by one of the shelter’s owners, refused to settle in it and preferred to continue to eke out a difficult existence and interrupt casual earnings.