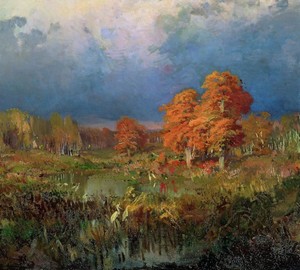 On the canvas is an autumn forest, in the middle of which there is a small swamp, which has grown grass in some places. The day is nearing completion: the sky has darkened, and only somewhere in the distance the pink sunset strip is barely visible.

Against this background, the golden crowns of majestic oaks in the foreground light brightly; the rest of the trees – birch trees and aspen – are full of red, yellow and green leaves.

Forest and sky are reflected in the pond, and white herons surround him along the banks. They are motionless and almost imperceptible at first, which emphasizes the general sad atmosphere.

The landscape is not completed, but according to the available canvas, one can judge a new stage of development in the artist’s work. He retains a poetic and romantic mood typical of his painting, but at the same time it is saturated with pain and longing; the strokes on this landscape are wide and dynamic, accuracy and detail are faded into the background. In part, this could be caused by the fact that Vasiliev did not write from nature, but from memory, and health no longer allowed to carefully study the detailed image.

AND. N. Kramskaya, describing his impressions of the “Swamp in the Forest”, noted that the picture has flaws, but they also include the genius of the work – as if Vasiliev had almost found a completely new and unique style, but had not yet been able to correctly show it. Probably, if it were not for premature death, a young painter would open many new artistic techniques and become the founder of a unique distinctive direction in art.