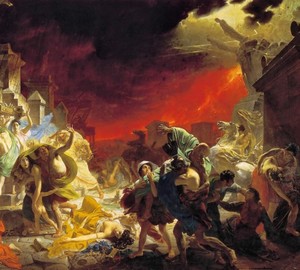 An outstanding master of historical paintings and portraits, Karl Pavlovich Brullov (1799-1852) is a vivid representative of the painting of romanticism, which painted the era of the first half of the XlX century. He was often accompanied by the epithets “Brilliant Karl”, “Charles the Magnificent”, rarely to whom such fame and recognition of contemporaries fell. Having received an art education in Russia, Brullov went to improve his painting in Italy.

About the plot of the painting “The Last Day of Pompeii.”

The plot of the painting “The Last Day of Pompeii” is taken from ancient history – the eruption of the Vesuvius volcano and the collapse of the city of Pompeii (II century BC). e.). The omnipotence of blind rock is a favorite theme of the art of romanticism. The death of people, their confusion and horror before the impending collapse of the city were conveyed by the artist in an interesting and complex multi-figure composition.

Theatrical effect of postures and gestures, with various expressions of faces, the painter’s fluttering draperies of clothes shows the whole drama of the scene, however, despite the impending death, heroes do not even lose their beauty and greatness of spirit even in suffering. This was the philosophy and aesthetics of romanticism. Brullov’s painting with the inherent hope of the beauty of form and the solemnity of bright color contributes to the transmission of the pathetic mood of the unfolding action.

After performing this monumental canvas, the artist received European fame. Having moved to Italy at the end of his life, he finally settled there and became an honorary member of the Academy of Arts in Milan, Florence, Bologna and the Academy of St. Luke in Rome.