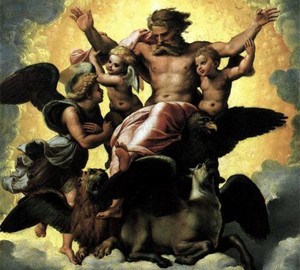 The vision of Ezekiel is Raphael. Around 1518

This small canvas was written by Raphael oil around 1518. for a private customer. The background of the picture fully corresponds to the biblical description of this vision: “…a stormy wind came from the north, a great cloud and a swirling fire, and a radiance around it ”(Ezekiel 1: 4). In the very vision, God is depicted floating in the air, supported by “the likeness of four animals.”. Christian tradition identifies them with four winged creatures: a man or an angel, a lion, a bull and an eagle that symbolize in the visual art of the four Evangelists (Mark, John, Matthew and Luke). It was this tradition, and not the description of the vision of Ezekiel proper that Raphael followed when writing this picture.

The semi-naked figure of God the Father, although gray-haired as the Hebrew Eternal (Daniel 7: 9), but with the body of a man in his prime, is depicted in the spirit of the Renaissance; God looks like Jupiter, the king of the gods of pagan antiquity. The colossal power of vision is conveyed by comparison with the scale of the landscape: at the bottom of the picture you can see the tiny figure of Ezekiel himself, snatched from the shadow by a bright ray of light.

GOD. In the New Testament, Christ gave a mandate to his disciples: “…go teach all nations, baptizing them in the name of the Father and the Son and the Holy Spirit, ”where the doctrine of the Holy Trinity went from. In the artistic representation of the Trinity, the One God appears in three persons: God the Father, God the Son – usually with stigma, and God the Holy Spirit, most often in the form of a ray of light or a dove.

In the Renaissance, God the Father was portrayed as a static figure of an old man with long gray hair and a waving beard, as in the painting by Mazachcho Trinity (1427-1428). God the Father on the frescoes of Michelangelo Creation of the world (1509-1512; Sistine Chapel, Vatican. Rome) looks like Jupiter.

Usually the attributes of God could be a triangular halo representing the trinity; the ball as a result of his work as the Creator of the world; or the Greek letters of alpha and omega, meaning his power over the beginning and end of all things.