Picture “Vision of the surroundings of Brussels”, David Tenirs the Younger 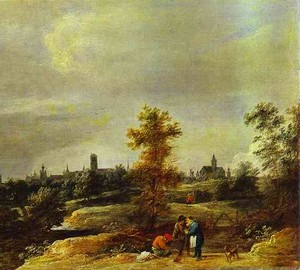 The appearance of the surroundings of Brussels is David Tenirs the Younger. The beginning of the 1650s. Oil on canvas. 26.6×38.4
In 1651, Tenirs, flocks of court painter Archduke Leopold Wilhelm, moved from Antwerp to Brussels. In the early 1650s, he painted a picture in which he captured the surroundings of this city. In the depths of the landscape are the real buildings and churches of Brussels. One of them can be identified: on the right, on the horizon, the Church of Our Lady on the Zafel (Onze-Lieve-Vrouwe Ten Zavel) is visible. The same architectural structure is shown in close-up in the composition of Tenirs “The Shooting of Birds in front of the Church of Our Lady on the Sun” (1652, Museum of the History of the Arts, Vienna).

Genre elements in the picture “Vision of the surroundings of Brussels” are minimized. The figures of the three talking peasants (right in the foreground) with their bright clothes revitalize the landscape, solved in a bluish-green tone.