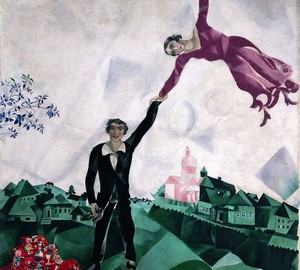 An unusual look at seemingly ordinary things, their own interpretation of the world, romance and philosophy, which was based on nationality, the desire for avant-garde and personal fate – this is what distinguishes the stylist of the work of Mark Chagall. The painting “Walk”, without a doubt, is the most recognizable work of the master.

The role of Bella Rosenfeld in Chagall’s life and work cannot be overestimated, since all the love moods encountered in the work of the painter are invariably connected with her image. A “walk” was written when young people were already married, and Ida’s daughter was born in the family. The artist was unusually happy that he did not fail to celebrate in his paintings.

The main character of the canvas, Bella, flies, tearing off the ground, and this is an expression of the highest point of happiness. Young lovers enjoy each other’s company, rising above all earthly, insignificant. Love is the main condition for victory over earthly gravity.

Also, two contrasting principles are interestingly presented in the picture: heaven and earth. The green squares of the earth with the uneven rows of low houses are balanced by a clear mother-of-pearl sky, almost cloudless. Mark stands on the ground, holding the hand of Bella, which is located in the sky embroidery, and this once again emphasizes that no distance is afraid of love.

The painting “Walk” has become part of the triptych, which in addition to it includes the work of the “Double Portrait” and “Over the City”. If in the first work Bella only sits on her beloved’s shoulders, as if preparing to break away from the ground, and in “Walk” she already soars into the sky, then the third canvas already shows us two flying lovers. Today, triptych is separated, and the “Walk” itself travels around the world, occupying places of honor in museums of different countries, because Chagall is considered “their” by many – the French, Russians, Israelis, and Belarusians.

In 1973, Chagall, an already elderly man and a world-famous painter, arrived on a visit to the Soviet Union. For almost 30 years, Bella was not alive, and Chagall himself was married as a second marriage, but he again came to this picture in the Tretyakov Gallery, where she was exhibited, stood for a long time near his masterpiece and thought about something for a long time.

Looking at a harmonious composition, through the prism of lyrism and romance that Chagall managed to convey, the viewer does not even have questions about unnaturalness, fantastic flight and such a walk. Or maybe it’s also because everyone felt something like that sincerely and very loving …