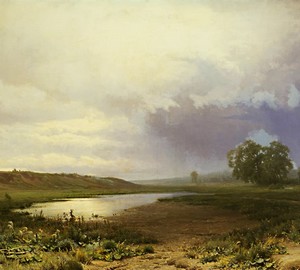 Wet meadow – Fedor Aleksandrovich Vasiliev. Canvas. butter. 70 x 114 cm
The painting was written after the artist moved to Crimea, where he had to go due to illness. However, his heart was devoted to Russian nature, its fields and forests, which he wrote from memory. So on this canvas Vasiliev depicted not the southern landscape, but his memories of his homeland. Confirmation of this is sketches written before moving, including an artistic sketch with the same name.

In the picture – a meadow after the rain. The sky speaks first of all about the past storm and the approach of the sunny day: on the right side it is still gloomy, tightened with clouds, but the bluish-white clouds and warm rays have almost supplanted the bad weather. This transition is reflected in the pond, and ripples from the wind still pass through the water.

The main part of the picture is occupied by the meadow with grass and wildflowers. In the background is a low cliff on the left and a pair of trees on the right, a forest strip in the distance, as well as a path running from the edge of the canvas to the pond.

The artist depicted vegetation using a variety of shades of green, which makes the landscape fresher and brighter: all these details, individual blade of grass and twigs can be viewed endlessly. However, this does not look too catchy – on the contrary, Vasiliev made the atmosphere of his creation calm and cozy, including due to a smoother and fuzzy sky.

In general, the color palette of the picture is quite uniform, the creator pays more attention to the game with light and shades. Returning to the main idea – changing the bad weather with good weather – it makes the left side warmer and the right one cold and dark.

Another feature of this canvas is that the artist managed to combine the dynamism and simplicity of the image. If you pay attention to the composition, you can notice that there is no definite point where all the objects in the picture seem to be striving. The audience’s attention is drawn to both the pond and the trees, and the changing sky – if you remove any of these components, the sense of integrity that the artist achieved by placing key objects in different places will disappear.

The simplicity of the landscape lies in the fact that it is not overloaded: in the foreground there are only small and not too important details. This allows the viewer to immerse himself in a picture, “enter” into it.

The landscape of Fedor Vasiliev “Wet Meadow” is one of his most outstanding works, in which he showed his ability to work with contrast, use complex techniques without losing his inherent soulfulness.