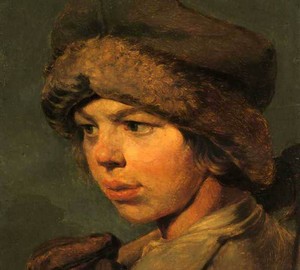 AND. G. Venizyanov was one of the first in Russian painting to write peasant life. Among his works there are many portraits of serfs who lived in his estate. Especially good he succeeded in the images of children. Alexey Gavrilovich opened an art school for talented peasant children in his village. He even bought some from other landowners.

The Zakharka etude, now stored in the Tretyakov Gallery, perfectly shows the strength of the artist’s talent and his expressive gift.

The model for the picture was a real boy, the son of the serf peasants Fedul and Anna Stepanov. Venetianov, apparently imbued with sympathy for Zakhar, will write it more than once.

Although the image of the boy is a small sketch, his strength is such that it makes you stop and consider these serious ones beyond your years.

The image of Zakharka fills almost the entire plane of the picture. The artist for a reason chose this angle for his model. The boy’s head is slightly turned to the viewer, but he looks to the side. A hidden movement is hidden in his pose, and at the same time, peasant thoroughness and self-confidence are felt.

The picture is written in dark colors, only the face of the child stands out with a light spot. Colors unobtrusively cross one into the other, without distracting us from the main character.

At first glance, Zakharka’s face is ugly: wide cheekbones, disheveled blond hair, nose with potatoes, chubby lips, thick eyebrows. But the child’s gaze is not at all childish, it is serious and smart, developed beyond its years. Such a “small little man.”.

It happens in the winter. The fur hat and mittens are clearly great for the little boy. Most likely – paternal or older brother. This means that the Zakhara family is poor and possibly large, like most simple families at that time.

It can be seen that the boy already knows well what heavy peasant labor is. In the village, children grow up early. He holds an ax in his hand. Maybe he’s going to the forest for firewood or he’s going to help his father. His face is concentrated, probably the artist tore him from an important matter.

The talent of Venetianov is such that the image of Zakharka evokes sympathy and empathy with the viewer. It can be seen that the boy, although small for years, is kind, smart and a good assistant to parents.

In his works, the painter repeatedly showed his confidence in the best qualities of the Russian people and a simple peasant. Venetianov wrote serfs realistically, without embellishing their life. And at the same time, his “many” portraits evoke respect and confidence in the strength of mind and purity of the souls of these people.