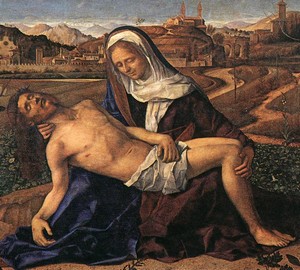 Pieta – Giovanni (Jambellino) Bellini. Around 1505. Wood, tempera. 65×87
Another name for the work is Don’s Drink to the Dalle Rosa. It was made by private order for a home chapel. In the panoramic interpretation of the landscape, against the background of which the Mother mourning the Son is mournfully silent, researchers see the influence of representatives of northern schools and, in particular, Albrecht Durer, who twice visited Venice. And besides, a Gothic German sculpture, well known in Italy. Since the buildings on a landscape background, which contrasts with the triangular monumental composition of the first plan, distinguish between the palazzo della Rajone and the facade of the Vicenza Cathedral, erected by Andrea Palladio, there was an assumption that the customers could be the inhabitants of Vicenza. However, the landscape depicts the super-rotary tower of Castello, and the Nattis River, which flows in the area near the city of Chiviale, and the plain bell tower of San Apollinar Nuovo.

The cradle at the head of Christ is a symbol of divine love for the human race, and here is His sacrifice. The ivy motive is continued in a fragment with a chopped tree. In the Middle Ages, due to the fact that the shoots of this plant often blame dead trees, an allegory arose: “Non meis viribus” (“Not curly”) – such a tree was a symbol of the life of the soul after the death of the body, as a blessing of faith in the Resurrection of Christ.