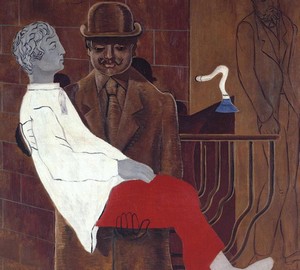 A pie is a motive very popular in medieval religious art and in the Renaissance. In the classical version, this is an image of the Virgin Mary with Jesus Christ, removed from the cross, on his knees.

In the picture created by Ernst, the role of Our Lady is played by a typical bourgeois with a mustache twisted like Erkul Poirot. He wears a low-valued bowler hat, a strict business suit with a tie. He kneels and holds in his arms a young man in a white shirt and red trousers depicted in profile. He is barefoot, and the gray color of the face and body emphasizes that he has long been dead, life has left his body and deprived of natural colors. The body suspiciously resembles the artist himself, and the image of the bourgeois in the “background mode” (it is as brown as the stone wall behind the figures) hints that the author is crucified with the old banal world for his revolutionary art.

The person depicted in the background also attracts attention. These are schematic outlines, a flat, incorporeal essence, the image of a person – he has a beard, closed eyes and sadly sagged shoulders. It is striking that the same absurd abstract staircase is depicted next to it, but a person seems to be hovering over it without finding support. This schematic image contrasts dramatically with the clearly and realistically depicted shower “cash”. It seems as if the artist reproduced his dream in the picture – strange, sad, ambiguous and a little crazy.