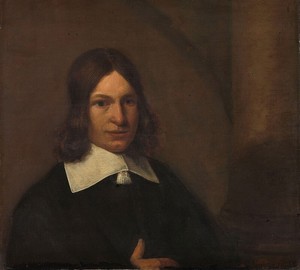 XVII century, Holland. The painting reaches the highest peak. Paintings hung in every home. The demand for them was huge, so how to get small canvases with a simple and intuitive storylines could afford ordinary citizens. In a small country worked for almost two thousand artists, creating very stiff competition. Each of them had to find their narrow specialization, clearly defined the genre.

One of the best painters who write in the genre of home or “room” painting was Pieter de Hooch. About his life little is known. He was born in a poor family in Rotterdam in 1629. Most likely, the boy would have been a good bricklayer, if he continued his father’s work. But seventeen year old young man chooses a different path in life and went to Haarlem to study painting.

His first teacher was the painter Nicolaes Berchem, writing in the genre of pastoral landscape. But simply copying the landscapes in the “Italian style” after some time ceased to satisfy Peter. He was more attracted to genre scenes in the spirit of Frans Hals. He leaves the workshop and in 1648, begins to work independently.

The next two years, de Hooch is trying to make a living selling his paintings. A young man with a mild humour says of the company brave soldiers or players in pubs, merry revelry in the pubs (“the Merry revelers”, “Players in backgammon”). In the works of this period is dominated people, the interior is painted very poorly.

In 1650 Peter gets a job as a Valet and personal artist concurrently to the dealer cloth Eustace de La Grange. This gives the youth the opportunity to gain new experiences, a lot of traveling around the country. Favorite hobby merchant was collecting paintings. Of them collected in the collection there are 11 works of young artists.

In 1652 Eustace de La Grange moved to a quiet and clean town of Delft, and with it goes Peter. Delft at that time famous for its picturesque school. The town is working with many painters, including the famous Karel Fabricius and Jan Vermeer.

The official recognition of the painter gets in 1655, he was accepted as a member of the Guild of St. Luke, he gets the right to sell his paintings and to recruit students.

The master abruptly changes the subject of the paintings – now it’s domestic scenes of everyday urban life. The main characters become Delft city woman: caring mother, a hardworking maid, Thrifty Housewives (“parent duties” and “Mistress and maid”, “the lady cleaning the Apple”). May be, in part, this was facilitated by his marriage to Jannetje van der Burch, in marriage, with whom in their family will have seven children.

The subjects of his works are simple, but each has its own mood. The action moved to charming courtyards and cosy Dutch houses. The interior is complicated, there is plenty expressive, clearly defined parts.

The master’s palette now consists mostly of bright and muted brown colors with beautiful color nuances. His paintings are filled with clear air and light.

Nostrum de Hooch – a view through a door or window opening on the open space (“Courtyard in Delft”, “Dutch interior”). Space, light and people are in full harmony with each other. In all the paintings of “Delft period of” Pieter de Hooch is a feeling of poetry, regularity and comfort.

1660 year brings him his first test. Eustace de La Grange went to America, and the artist with his large family moved to Amsterdam. Accumulation quickly come to an end, and the work sold very poorly. Deciding that to blame a simple plot, Hoch began writing family portraits, scenes, walks and musical concerts, the interiors of rich houses (“Concert”, “Couple with parrot”). Changing color mood paintings: the artist begins to use more cold and dark colors, appear white shades. But the recognition it never comes.

A big blow for Peter getting his wife’s death in 1667. His health has suffered greatly, the last few years he lived in poverty. It was believed that the artist died in 1684 in the madhouse in Amsterdam. But recent studies have shown that we are talking about his son, so that with certainty the date of death of the painter it is impossible.

Currently, paintings of Pieter de Hooch, one of the best “small Dutch”, exhibited in the most famous museums in the world.