“Polish Horseman”, Rembrandt – a description of the picture 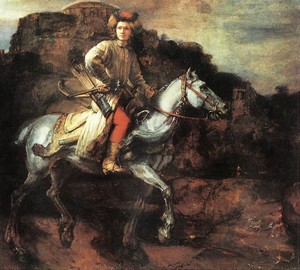 Having been in oblivion for almost 150 years, the painting “Polish Horseman” was suddenly opened in 1897 – in the Polish town of Dzikuv, the connoisseur of painting Abraham Bredius bought a canvas with a white horse and a rider in a characteristic East European vestments. “Yes, this is the great Rembrandt van Rhine!»- exclaimed the world of art.

However, the newly opened canvas immediately became the object of heated debate. Art critics have always questioned the authorship of Rembrandt, and the most popular hypothesis is as follows: the best student of the great Dutchman Willem Drost painted the picture. Despite the fact that an impressive evidence base was brought under this hunch, the Polish Horseman is still listed in the legacy of Rembrandt and no one else.

It is not clear what the master had in mind: did he really portray a real hero in such an unusual robe for the Netherlands, or again set off into a certain theatricality (Rembrandt loved to dress his heroes in unusual costumes), however, researchers tend to see a man here belonging to the Polish cavalry of the XVII century.

The coloristic solution is consistent with the style of the master – the predominance of brown and red tones, the deliberate highlighting of the hero. The only alien element of the picture is the white horse of the rider. She looks somehow constrained and very unconvincing. Rembrandt always wrote very subtly and filigreely.

Another interesting fact is that a year before the start of work on the canvas in Amsterdam, a pamphlet appeared that protects the radical sect of the Socinian. What was the name of the pamphlet? Yes, the Polish Horseman. Perhaps Rembrandt thus showed his sympathy for the sect?

To date, there are much more questions about this picture than the answers, and the Polish Horseman remains the most controversial work of the master. Or maybe Rembrandt has nothing to do with it?…