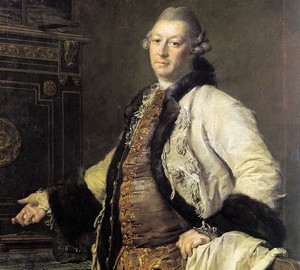 The outstanding portrait painter of the 18th century Levitsky served as an artist at the court of Catherine II. In the inherent era of the ceremonial portrait, the painter captured the circle of privileged aristocracy.

The composition of the portrait of architect Alexander Filippovich Kokorinov is saturated with allegorical details, so beloved in the mentioned century, full of conventions and manners of the Great-Knowled etiquette. There are no random objects, everything is designed to emphasize the nature and dignity of the hero’s personality. Kokorinov points to the plan of the Great Building of the Academy of Arts in St. Petersburg, built by his command of Catherine. Later, he will become the rector of this first and long-time only institution in Russia that gave an art education.

The architect is represented by Levitsky in all his splendor. The masterly possession of the picturesque technique makes the objects in its works surprisingly material and tangible – as if real silk folds, overflows of the camisole atlas and the dressiness of the shiny fur are visible.

For this portrait, Levitsky was awarded the title of academician of painting – the highest award for the artist.