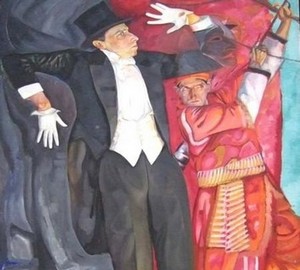 Portrait of Vsevolod Emilievich Meyerhold – Boris Dmitrievich Grigoryev. 1916. Oil on canvas. 247×168
The work of Boris Dmitrievich Grigoryev (1886-1939) does not fit into the framework of traditional schools of painting, defined by the history of art. He is then inclined to empathize with passeism (aspiring into the past) and the elegical mood of his contemporaries – artists of the World of Art association, then to rejoice and juggle in zucchini and taverns along with the Blue Rose masters. Later, his picturesque technique crystallizes into something called “neoacademism” with elements of the cubist fragmentation of form, designed to emphasize the acute psychology of the characters of the heroes of the paintings.

Vsevolod Meyerhold, known for his acting and directing work and epatigative behavior, so delighted Grigoryeva that he said, “You need to go to the museum!”. Tilt to farce and grimacing, Meyerhold became the creator of the expressive system of acting – “biomechanics”.

The artist captures Meyerhold in the form of the protagonist shot shortly before the portraiture of the Dorian Gray film. But in front of the audience, rather, not a cholen dandy, but a tragic parody of a person, fate. The essence of the genius Grigoryev lies in his visionary solution of the canvas – the mystical director will become the victim of a revolutionary element personified in the guise of a strong, earthly Yanychar.