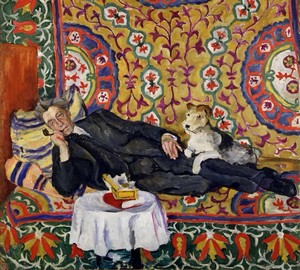 Portrait B. Uh. Meyerhold – Petr Petrovich Konchalovsky. 1938. Oil on canvas. 211×233
During the period of mass repression, shortly before the arrest and death of Meyerhold, P. P. Konchalovsky (1867-1956) created a portrait of this outstanding theater figure. For the director-reformer Vsevolod Emilievich Meyerhold, 1938 began dramatically: on January 7, the Committee on Arts adopted a decree on the liquidation of the Meyerhold State Theater (GOSTIM).

To emphasize the conflict of personality with the surrounding reality, creating a portrait of the director, the artist used a complex compositional solution. At first glance, it seems that a dreamer is depicted on the canvas, whose dreams are embodied in colored patterns that cover the whole wall and sofa to the floor. But, looking closely, the painful apathy of the model, detachment from the outside world guesses. It is through a comparison of a bright carpet, densely covered with ornaments, and a monochrome-solved figure of the director, which is illusoryly squeezed and confusing in bizarre bends of patterns, Konchalovsky reveals the image.