Portrait of a boy, Petrov-Vodkin – description 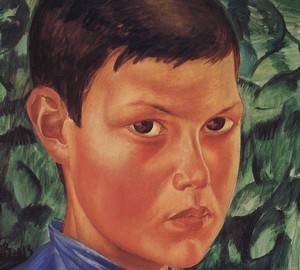 The theme of the children’s portrait was very fresh for the artist, and rather was caused by the search for innovative means of expressiveness and forms: after the deafening success of “Boiling the Red Horse”, Kuzma Petrov-Vodkin continued to conquer new horizons for himself.

Portraits in the creative biography of a painter are very common, it is enough to recall the wonderful images of Anna Akhmatova, but work on children’s portraits began precisely with this young boy. After that, the author will create many portraits of children of different ages (including her only and long-awaited daughter) and nationality, singing the beauty of a young person, freshness and immediacy.

Like every intellectual creator, Kuzma Petrov-Vodkin sets a certain task for himself, starting to work on the picture, and tries to successfully solve it in his characteristic style. Here the task lies in the face of the hero – this young guy is still a boy, but something strong-willed and courageous is already read in his image. This is a logical natural growing up, the transition from childhood to youth and the painter captured. His hero still has a long way to turn into a man, but the character, expressed in a attentive insightful look, shaken lips and an even face, is already visible and easily read by the viewer. It can be assumed that the boy is no more than fourteen years old and history, unfortunately, did not retain information about him.

As usual, in Petrova-Vodkin, color is a bright expressive force. Strictness in look softened by a brown ring, a shade of toplate chocolate. With a filigree alternation of contrast red and beige flowers, the boy’s face is molded: raised cheekbones, chin, thin nose, forehead with barely outlined wrinkles testifying to the thought, mind of this young hero. An attentive viewer will notice that the boy has no eyelashes – Petrov-Vodkin simply did not draw them, although the boy’s eyes are not too deep.

In order not to distract the viewer from the main character, Petrov-Vodkin neutralized the background as much as possible without making it faceless and even. Green leaves, suggestive of spring, are expressed in soft delicate tones, without losing relief and expressiveness. The choice of this decoration also has a metaphorical meaning. Fresh greens suggest thoughts of spring, the heyday of nature, so Petrov-Vodkin emphasizes in this way the beginning of the prosperity of the boy, ahead of whom is a whole life, and while he is like spring greens, he is only starting the journey from a gentle leaf to a full-color riot of colors.

The chaotic strokes that interpret the background gives the canvas dynamics and liveliness. This can be compared with the liveliness of the thoughts of the protagonist, who still rush childishly, replacing and absorbing each other. The picture of the painter is characterized by an accurate, flexible line, which is present on the canvas, but is not highlighted in the foreground.

An amazing way, a portrait where a boy is taken close-up, where there is nothing superfluous, still carries a nationalist philosophy that is characteristic of the painter Petrova-Vodkin – we can be absolutely sure: we are a Russian hero in front of us, and no other. This ability to portray “Russianness” and distinguishes the work of the artist as a whole.

Love for the fatherland, patriotism in the not pathos, but in its intellectual sense is the main wealth of the content of any of the works of Kuzma Petrov-Vodkin. And also faith in humanity and hope, in a compartment with love for the future, in the person of children in general, and in the image of this serious boy, in particular.