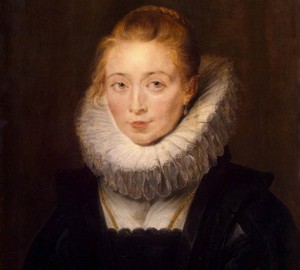 Portrait of the American infanta Isabella – Peter Paul Rubens. The middle of the 1620s. Wood, butter. 64×48

Among the portraits of the great Flemish painter, this canvas occupies a special place. From a flickering half-brand, a young woman of the 17th century looks in a black dress with a snow-white collar – a milling cutter. The picture is performed in restrained colors, built on elusive subtle color transitions. Rubens’ brush (1577-1640), usually widely and actively creating a form, here gently touches the created portrait. Luckily look at the viewer green-drawn eyes of a girl. Light hairs, knocked out of the hairstyle, unshakably curl at the temples, forming a soft and luminous halo around the face. However, skillfully written lips are tightly compressed, they are bound by the rules of etiquette, not a single extra word will fly out of them. The mistress of this angelic, barely noticeable smile knows how to keep palace secrets. This work is not ceremonial, it is emphasized chamber and simple in composition. The portrait of the girl is made according to a drawing written from nature. There is an assumption that the facial features of a chamberlain are similar to the face of the early deceased daughter of Rubens – Clara Serena.