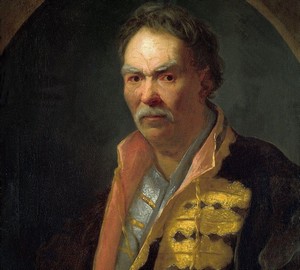 Portrait of the floor getman – Ivan Nikitich Nikitin. 1720s. Oil on canvas. 76 x 60 cm
Ivan Nikitich Nikitin is one of the founders of Russian secular painting. Until the 18th century, a picturesque tradition in Russia developed exclusively in line with iconography. Nikitin, by origin of the priest’s son, became a favorite court painter (as they called him at that time, “hoffmayer”) Peter I and was sent to study in Italy. His hands belong to portraits of many prominent statesmen of the Peter’s era. After the death of the patron emperor, the fate of the artist was unsuccessful. In 1732, according to the denunciation, he was first imprisoned in the Peter and Paul Fortress, and then exiled to Tobolsk.

A portrait of a floor gethman is a unique example of the image of a man of the 18th century without a golden-branded wig expanded for the era. Before the audience appears the image of a brave warrior. With a harsh look, an expression of the tired face of his hero, the artist conveys his biography.