Portrait of a merchant from the Vedig family, Hans Golbane the Younger, 1532 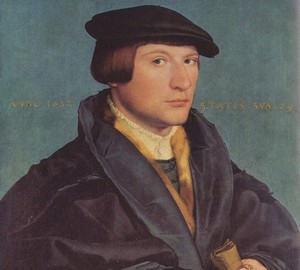 The coat of arms on the ring, putting on the finger of a young man, made it possible to determine that a member of the Vedig family from Köln was captured in the portrait. More precisely, before us, most likely, twenty-nine-year-old German Vedig III, a merchant and representative of the Hanseatic Union, who enjoyed special trade privileges in London. Arriving in England, Golbein (Holbane) found many customers among German merchants who settled in the London quarter of Stillard.

The figure of a man dressed in black stands out on a a azure background. A person turned three quarters to the audience, and the angle of the right hand form a compositional pyramid, bringing a sense of static harmony to the portrait. The image radiates wise calm and spiritual adherence, underlined by a strict style of clothing. Between the pages of the book depicted in the foreground is a sheet on which the words Veritas odiu [m] parit (“Truth breeds hatred”) is read. Artificial color ownership, accurate drawing, realism and masterful distribution of volumes, combined with the psychological saturation of the image, put Holbein on a par with outstanding portratists of the European Renaissance.