Portrait of a scientist, Ferdinand Bol 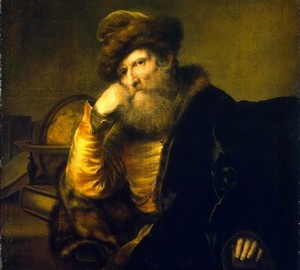 The portrait of the scientist is Ferdinand Bol. Around 1650. Oil on canvas. 122×98
Ferdinand Bol (1616-1680) is a Dutch artist and graphic artist, a student of Rembrandt, who perfectly mastered the techniques of his picturesque manner, as a result of which many of Bol’s works were mistakenly attributed to the master. Almost nothing is known about the circumstances of Bol’s life. He became famous thanks to the portrait genre and is rightfully considered one of the best Dutch portrait painters.

The “Portrait of a Scientist” is highlighted by a cozy warm brown range resembling amber stones. An elderly man with a beard in thoughtfulness feeds his head with his hand. Behind him, the researcher’s attributes are located on the table – a globe and books in thick bindings. A scientist whose appearance resembles a Russian boyar, is immersed in his thoughts, ponders future discoveries.