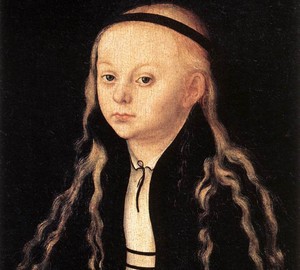 This portrait of Lucas Kranah the Elder (1472-1553) presumably depicts Magdalen, the second daughter of the famous reformer Martin Luther, with whom he was friends. Under the influence of his ideas, Kranakh became a “painter of reformation”, reflecting the concept of Luther in his works and illustrating his compositions.

“Portrait of a Young Girl” is the pinnacle of the artist’s portrait art. Magdalena’s image is very realistic, her childishly slightly swollen lips and shiny sad eyes reflect naivety and slight sadness. Blown loose blond hair, waving on dark clothes in waves, emphasize the gentleness and femininity of the heroine.