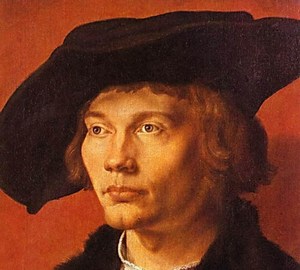 The portrait of a young man is Albrecht Durer. 1521. Wood, butter. 45.5 x 31.5 cm
The period to which the presented portrait relates is characterized as the time of the complete artistic maturity of Dührer, when his interest in the portrait genre was great, he created works in which he accidentally penetrated deeply into the spiritual essence of his models.

“Portrait of a Young Man” is one of the best in this sense. A young man in the picture holds a sheet of paper in his hand, the first few letters of his name are read on it: “R [or B] nernh”, the rest are covered with fingers. It was established that this is Berhart von Riesen, a merchant from Danzig, about whom Dührer recorded in a diary that he made his portrait and received eight florins.

The model covers the entire area of the board, and the hat on both sides was cut off. The dark color of the clothes concentrates the attention of the viewer on the expressive features of the face: a sharply outlined chin, folds of the lips, a calm and insightful look, fixed in the distance – all this speaks of volitional and active nature. Unfortunately, Riesen, who turned 30 years old when Dührer created his portrait, died of the plague only a few months later, in October 1521.