Portrait of a young man with a skull (Vanitas), France Hals 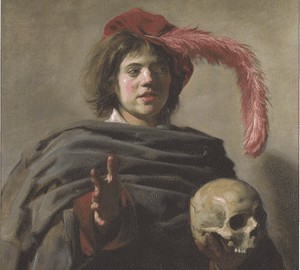 France Hals is one of the most famous painters of the golden age of Dutch art.

In essence, this portrait is not a portrait: despite the fact that a young man is often identified as Hamlet, the picture is most likely a traditional allegory for the Dutch art “Vanitas” (from Latin – “empty”), that is, vanity in the sense of ephemerality and vanity of earthly wealth. The proof that the plot is based on this topic is a skull reminiscent of death.

The Dutch tradition of portraying a young man holding a skull dates back to the 16th century engravings. His exotic robe resembles a picturesque manner of Utrecht masters who followed the new reception of Karavaggio then. But there is a significant difference in the work of Hals: the figure does not protrude from the shadow to the light, as usual among the artists of the aforementioned school, but is illuminated from behind. Here there is the effect of “trompe I’oeil” (from French – “deception” – an illusory reproduction by picturesque means of real objects or figures, causing the effect of the presence of genuine nature, not image) – the skull is depicted as if it were outside the plane of the picture. All this testifies to the great skill of the author.