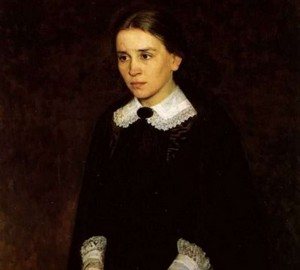 The “Council of Travelers” was called by contemporaries Nikolai Alexandrovich Yaroshenko. A man is deeply principled and honest, he hated the world of violence. His art is filled with high pathos, imbued with the noble idea of fighting for freedom and truth. The artist touches the most acute, as they were called, “damned questions” of the time, addresses topics from the revolutionary movement, and depicts typical images of the best people of the era.

Looking at the portrait reproduced here, but not knowing who is in front of us, it is difficult to assume that the great Russian tragic actress Pelagia Antipievna Strepetova is depicted – her appearance is so simple, so restrained, the color scheme of the portrait is almost ascetic, the drawing is concise, the composition is strict.

A simple-haired low woman in a dark dress with white cuffs and a collar stands right in front of the audience, immersed in her thoughts. Against the dark background of the canvas, her pale face with the seal of life’s adversities and hermetically coupled hands stand out sharply. “All her nervous nature, everything that is tormented, tragic, passionate in her, is felt here in the portrait,” wrote the famous artistic critic V. AT. Stasov.

Strepetova was the performer of such roles as Katerina in the Thunderstorm A. N. Ostrovsky, Lizaveta in “Bitter Fate” A. F. Pisemsky. Heroins of Strepetova – nature whole, strong, deeply suffering, suffocating in the “dark kingdom” of wild mores. The actress’s game was perceived by contemporaries as a protest of a living passionate soul against suffocating darkness and inhumanity.

This was depicted by Strepetov and Yaroshenko. The image of a fragile modest woman is full of great spiritual nobility and purity, some special inner beauty that transforms her face. In a straight-standing figure, in the energy of the clutch hands and tight-fitting lips, in a clear, as if from the inside of a glowing look, there is a strong, decisive, passionate nature, ready for sacrifice in the name of good and justice.