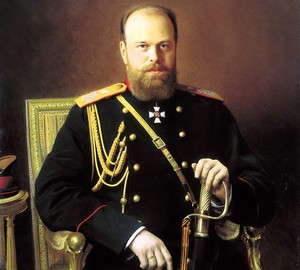 One of the last works of the outstanding portrait painter Ivan Kramsky was a canvas depicting the autocrat Alexander III .

The artist received an order for this picture from a member of State Council A. AND. Polovtsova, who was also an honorary member of the Academy of Art. The portrait is written strictly and accurately. With the implied plot of proprietary freedom, Kramskaya was free in technical means of incarnation. The texture, the plasticity of the image, the face of the king – this is where the painter showed artistry and technical talent.

The uniform is decorated rather poorly, given all the king’s awards – the viewer can only notice the white order of St. George II degree, and the award saber of gold.

One cannot but note the filigree of the image of the situation that surrounds Alexander – textured gold furniture that gives the portrait a parade and solemnity.

Alexander III himself greatly appreciated art, especially painting. It is known that he collected canvases, including “mobile workers.”. There were also canvases of Kramsky in his meeting. Later, Polovtsov will present another picture of Kramsky, a portrait of the emperor, but not to the king-collector himself, but as a gift to his posthumous museum.