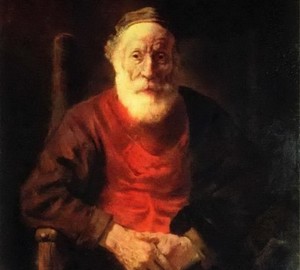 In the art of the famous Dutch painter Rembrandt (1606-1669) in the 1650s, a new type of portrait-biography, previously unknown in European painting, occupied the central place. Models of the artist were often served by elderly people who embodied life wisdom, to whose share the woeful trials fell. This decade has become the pinnacle of Rembrandt’s skill as a portrait painter. Through great calm, the artist transfers the psychological state of an elderly person, his experiences and thoughts. A special picturesque Arbrandt light and a soft twilight make it possible to feel it developing in a time stream that connects the past, present and future. The face and hands of the old man, the shape of which the artist gave not only with his brush, but also with his fingers, seem illuminated by some spiritual inner light. The image created by the master became the personification of perseverance and acceptance of his fate.