Portrait of an old man with a grandson, Domenico Girlandayo, 1488 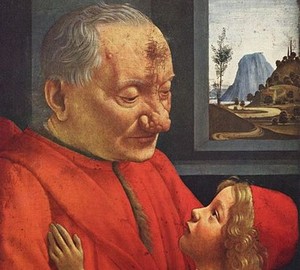 Portrait of an old man with a grandson – Domenico Girlandayo. 1488. Wood, tempera. 62×46
In “Portrait of an Old Man with a Granddaughter”, whose identities remained unknown, Domenico Girlandayo (1449-1494), a painter of the Early Renaissance, a representative of the Florentine school, sought a realistic and true image of his models. The image of a little boy with golden curls knocking out from under a red cap is touching, clinginging to his grandfather in the hope of finding either protection or an answer to some question that torments him. The artist did not flatter the old grandfather. He depicted his ugly face without embellishment, but a look addressed to the child, full of love and tenderness, gives his appearance spirituality. In the open window you can see the “ideal landscape” characteristic of the painting of the Renaissance: a valley with a river ribbon, hills and rocks towering in the distance. The relationships of heroes are as beautiful and harmonious as nature is beautiful and peaceful.

“Portrait of an old man with a grandson” entered the Louvre in 1886.