Portrait of an unknown in a triangle, Rocot 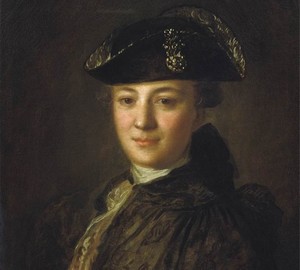 Portrait of an unknown person in a triangle – Fedor Stepanovich Rokotov. The beginning of the 1770s. Oil on canvas. 58 x 47 cm.

This picture has long intrigued art historians and just lovers of painting. It is believed that the portrait depicts a young man, presumably Count Bobrinsky, the son of Russian Empress Catherine II from a manganatic marriage with her long-term favorite Grigory Orlov. But the young man has a very fresh feminine face, which gave reason to suspect that the picture depicts a young woman dressed in a men’s dress. In those days, masquerade balls flour flourished, so that such a version is not without reason and credibility.

Suddenly, this assumption was confirmed by the results of a high-tech x-ray study. Under the top layer of paint was an image of a young woman who was carefully recorded, except for the face. That is, it can be confidently stated that a portrait of an unknown person in a triangle is in fact an image of an unknown lady in a men’s suit. There are suggestions that this is the first wife of N. Struysky.

The color of the picture is very restrained and dark, built on a combination of many shades of brown and black. Thanks to this color scheme, the rosy and fresh face of the character literally shines with life and youth. Despite all the monochrome of the color scheme, the canvas does not look gloomy – the depicted lady smiles gently, and the smallest details of the clothes and decorations of the triangular hat are painted with amazing craftsmanship.