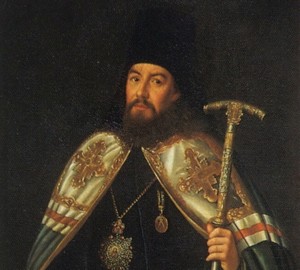 AND. P. Antropov stood at the origins of the portrait genre in Russia. His works still carry the features of parsun art: static posture, neutral background, low-emotion expression. At the same time, the artist sought to show similarities with the depicted person and reflect his character. Its portraits are not yet so elegant and masterfully painted as in later artists of the 18th century. But they have their charm inherent in folk art, and their own special style.

While serving in the Holy Synod, Antropov wrote a number of portraits of clergy. Such works include the image of Archbishop Gabriel Petrov. His Grace Gabriel was an outstanding person. In his early years, embarking on a spiritual path, he worked all his life for the good of the Church and the Fatherland.

At the time of writing the portrait, he wore the rank of archbishop of St. Petersburg and Revelsky. Antropov portrayed him in a black hood and richly expanded archbishop’s mantle. A precious panagy and a medal of a member of the Commission for the adoption of the New Investment project hangs on his chest. Gabriel entered there as a representative of the Holy Synod. He was very respected by Catherine II as a man of active, honest and educated. The right hand of the archbishop lies on the open book, in the left he holds a silver bishop’s rod. We see a smart face, living dark eyes, hiding a good smile.

Despite the high rank according to the memories of contemporaries in the life of Vladyka was modest and restrained. He fought vices in the clergy and did a lot to raise the level of spiritual education. He was a member of the Academy of Sciences and Arts. And even replaced the director of the Academy E. R. Dashkov.

His merits include the construction of the Trinity Cathedral, the emergence of the institution of the deaneries, the opening of a spiritual school in Kashin.

Heading the Novgorod and St. Petersburg Metropolis, Gabriel ordered to keep ancient books collected throughout the Novgorod Diocese in Sofia Cathedral, as well as to find and record ancient inscriptions in churches. So a fresco of the XII century was discovered in the Church of St. George in the Old Ladoga.

The painting is stored in the Russian Museum, where it was transferred in 1922 from the Alexander Nevsky Lavra.