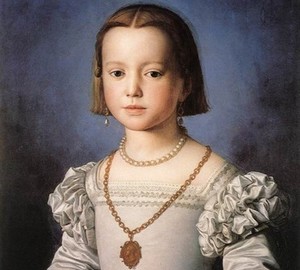 Working for the Duke of Cosimo I Medici, Anolo Bronzino, like many court artists, sought to convey in portraits not so much the inner world of man as the feeling by those whom he captured of their high position. From here – some detachment of the people depicted by him. But on the presented portrait, the girl, despite the solemnity of her posture and a little “closed” expression on her face, is full of charm, like every child. At the same time, some kind of sadness comes from her. Maybe the fact is that this is a posthumous portrait of the daughter of Cosimo I Bianchi, which was called by Biya in a decreasing way.

She was born even before the marriage of her father with Eleanor of Toled, from a woman whose name was known only by the duke and his mother. Biya died as a child, her father ordered Bronzino to paint her portrait, and the artist painted a little girl with rosy chubby cheeks and an adult look, looking like a spectator, but also past him.