Portrait of Bishop Anthony Trist and his brother Eugene, David Tenirs the Younger 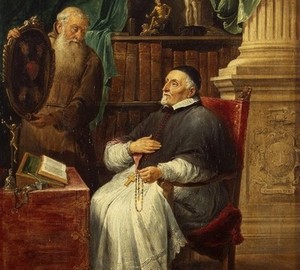 Portrait of Bishop Anthony Trist and his brother Eugene – David Tenirs the Younger. 1652. Wood, butter. 44×36
Anthony Trist (1576-1657) – Bishop in Bruges in 1617, from 1622 – in Ghent. He was a famous collector, patron and customer of Flemish painters, including David Tenirs the Younger. Somov determined that the image on the shield of two hunting horns and from a dog crowned with a cardinal hat, and the motto “CONFIDENTER” is the coat of arms of Anthony Trista.

The artist introduced the bishop to those sitting at the table, which shows the crucifixion and the open book (probably a prayer book). Holding the rosary in his left hand, and putting the right on his chest, Anthony Trist prays, looking at the shield with and depicting the symbols of Christ’s suffering (heart, hands and feet with wounds). This shield is held in front of the Three hundred by his brother named Eugene, the monk of the Order of the Capuchins. On the upper shelf there are two small sculptures – “Summing St. Jerome ”(left) and“ Christ at the column ”(right). Religious images that personify repentance and suffering are consonant with the bishop’s prayer mood.

According to Kling, Anthony Trist is also depicted in another Tenirs painting, Village Day.