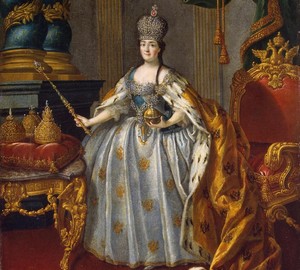 AND. P. Antropov was one of the founders of the portrait genre in Russian painting. His brush belongs to several ceremonial portraits of royal individuals. He wrote them to order for the Holy Synod, where he served, and for the interiors of numerous palaces and state institutions.

This picture is the preparatory work of the artist for the execution of a large copy from the coronation portrait of Catherine II by the Italian painter C. Torelli.

Catherine II The great, nee princess Angalt-Cerba, who arrived from Germany at the invitation of Empress Elizabeth Petrovna, was the wife of the heir to the Russian throne, and then Emperor Peter III. She came to power as a result of the coup, overthrowing her unpopular husband. She became empress in 1762. Her reign was remembered as the “golden age” in Russian history.

The Empress is depicted in a diamond crown, dressed in a white satin dress with golden emblems, a luxurious mantle with a ermine fur is thrown on her shoulders. On the diamond chain hangs the Order of Andrei the First-Called with a wide order ribbon of heavenly color. In her hands she holds symbols of power: a scepter and a power. Catherine has a pretty face with an official smile, long curls of dark hair descend on her shoulders.

Catherine stands in a room with columns and rich draperies caught in golden cords. To her right is the royal throne, to the left – on the carved table, on the velvet pillow three crowns of the Astrakhan, Kazan and Siberian kingdoms rest – symbols of the unity of the Russian Empire.

Compared to the elegant portrait of Torelli, the sketch of Anthropov is done in a simplified manner. The combination of gold, burgundy, white and green colors looks unnecessarily bright. The artist also does not set himself the goal of achieving complete portrait similarity. It can be seen that this is preparatory work. Antropov only tries on writing a full-scale ceremonial portrait of the empress.