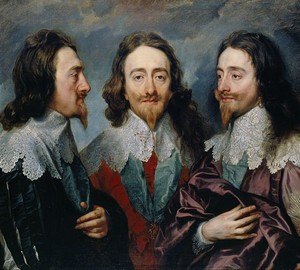 Portrait of Charles I, King of England, from three angles – Antonis van Dyck. Oil on canvas. 84.4 x 99.4 cm
Among the paintings, van Dyck traditionally pays attention to the Triple Portrait of Charles I. The idea of the work was taken from Lorenzo Lotto, who wrote “Portrait of a Man in Three Roots” – this work was in the Royal Assembly.

But van Dyck, of course, was not a plagiarist and did not lose inspiration: borrowing ideas was of practical importance, since in the picture of van Dyck they had to make a bust of the monarch, who could not be in person.

To make a bust, you needed a quality portrait from several angles. The main goal of the artist was to most accurately depict the king’s head. But Van Dyke, having coped with this task, remained true to himself: he marked the lines with light and shadow, without making linear contours, and the master managed to convey the tense mood of the model.

For further work, the portrait was sent to Rome. Sculptor Lorenzo Bernini caught “some woeful doom, read in the features of the sovereign.”. And indeed, after a time, Charles the First I was gone.

On Van Dyke canvas, he is depicted by a sophisticated man with thoughtful, sad eyes. Although the hero of the picture, of course, tries to hide his anxiety. According to three angles, the king has three camisols of different colors: blue, red and purple. The collar is the same, made of the finest lace. On the right side you can see a pearl earring – the usual decoration for a noble man of that era. In the center, the monarch is clothed in red, he holds a blue ribbon from the atlas with his hand, the order, Little George, hangs on it. From the left perspective, the king’s finger is drawn, passing through the same tape.

Three angles of the portrait of Charles I, the monarch of tragic fate, also paradoxically recall the Holy Trinity, because for the court ruler, indeed, similar to the earthly deity.