Portrait of Christina of Denmark, Duchess of Milan, Hans Golbein the Younger, 1538 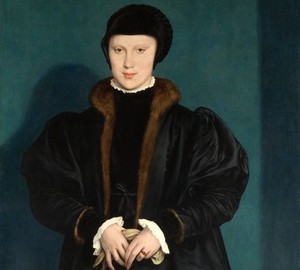 Hans Golbein the Younger is a German painter and Renaissance graphic artist, one of the greatest portratists of Western European art. For a long time he was the court artist of the English king Henry VIII .

In an era when there was no other way to get an idea of a person’s appearance (for example, photography), court artists wrote portraits for their cartridges, pursuing, first of all, the goal of achieving maximum similarity with the model. So, Golbein created portraits of possible candidates (numerous, as you know) for the role of the wife of Henry VIII. Sometimes it happened, as in the well-known case of Anna Klevskaya, that the portrait gave an embellished image of the future bride. Seeing her in reality, the king was incredibly disappointed. The marriage quickly broke up, and Anna was exiled to her estate. Christina’s portrait arose for a similar reason: the king intended to marry her, and he naturally wanted to have at least some idea of the girl. So Golbein was sent to Christina.

Christina, the youngest daughter of King Christian II of Denmark and Isabella of Austria, was born in 1522. At the age of eleven, she was engaged to the Duke of Milan, but two years later he died. Christina lived in Brussels, where in 1538 Golbein visited her. Historical sources claim that she posed for the artist only three hours. Despite the fact that three years have passed since the death of her husband, Christina still mourned him. Such a lady is depicted in the portrait, but it is unlikely that the king would have a mournful appearance of the bride. Therefore, Golbein gave charm and charm to the young face of Christina, who speaks not only about her deep mourning… She refused the king.