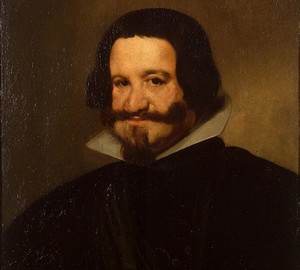 Working at the court of Philip IV, Velazquez repeatedly wrote portraits of the king and members of his family. The chief minister of the court, in whose hands for twenty-three years there was almost unlimited power over Spain, posed more than once to him.

Don Gasparo de Guzman, Earl of Oliveres, Duke of San Lukar de Barracudo is represented by Velazquez against the background of a grayish-olive background, his costume is underlined in modestly – black clothes with a white collar. From this dark frame, the fleshy face of Olivares, the mustache and beard only partially close the severed cheeks and chin. A heavy, massive nose hangs over tight lips, and black hair emphasizes a large convex forehead. Smart and insightful eyes make a completely different impression. They give out nature with a steel character in an outwardly calm person.

The work was created in the 1630s when Velazquez wrote modest submersible images, paying particular attention to the disclosure of the inner world of portraised ones.