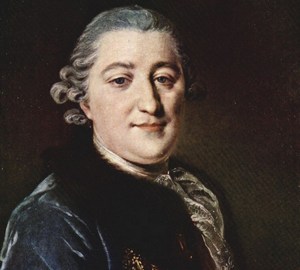 The work of Rokotov opens a period of brilliant prosperity of Russian portrait painting of the second half of the 18th century. Unfortunately, almost nothing is known about the artist’s life.

The character of the portrait is one of the Orlov brothers, new-born noblemen who contributed to the erection of Catherine II to the throne and were showered by royal mercies. Rokotov also owns a portrait of Grigory Orlov, the favorite of the empress and, apparently, the third brother Alexei, a participant in the defeat of the Turkish fleet in the sea battery near Cesma.

Ivan Orlov was an outstanding person. He did not succumb to the temptation of his court career, and having received the count title and rank of captain of the label guard of the Preobrazhensky regiment, he retired and subsequently refused ranks and insignia. Orlov preferred economic activity to the public service and zealously managed the enormous state and numerous estates of the family. He was proud of the role of the eldest in the family and the affection of his famous brothers, who, when he appeared, stood up as a sign of respect.

Orlov is represented on the portrait dressed in an expensive caftan, his posture is calm and proud, in facial expression through a mask of noble courtesy, the mind, firmness and imperious self-confidence are guessed. The magnificent picturesque skill of Rokotov is manifested in a soft modeling of volumes and in how subtly, with a beautiful sense of material, velvet, fur and lace are written.

Portrait I. Orlova, twice repeated by Rokotov, refers to the St. Petersburg period of his work. It is not dated by the artist, but it was undoubtedly written no earlier than 1762, when with the reign of Catherine II Orlova entered into force. The original portrait was engraved by E. P. Chemesov; in the inscription below the image, the engraver brought verses A. P. Sumarokova, praising the virtues of the count. Gravyura allows you to date a portrait of Rokotov with pride no later than 1765 – the year of death of E. P. Chemesova.