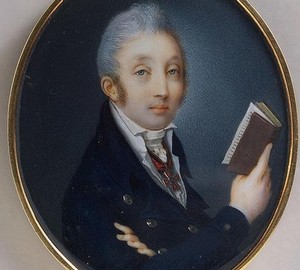 Portrait of Count M. M. Speransky – Pavel Alekseevich Ivanov. 1806. Bone, watercolor, gouache. 7.5×6.3
The art of portrait miniature on bones reached its peak in the XVIII – first half of the XIX century. Small images – prototypes of modern photography – were so popular that even a separate class existed at the Imperial Academy of Arts in St. Petersburg, where they taught this labor-intensive craft. Pavel Alekseevich Ivanov (1776-1813) first studied at the Academy, and after almost ten years he headed the mentioned class.

The portrait depicts Mikhail Mikhailovich Speransky – lawyer, statesman of the time of Alexander I, author of the “Plan of Public Education”. It is shown in a three-fourth turn on a neutral bluish background dressed in black frock coat. The Order of Vladimir of the 3rd degree hangs on the tape, Speransky holds a book in his hands and shows with all his slightly arrogant appearance that he has come off from fascinating reading just for the sake of this work of the artist.

In the apparent simplicity, the art of portrait miniature required great accuracy and patience, because the image was formed from hundreds of subtle brush strokes not visible from the distance. The works written on the ivory plate are extremely fragile. Perhaps that is why Ivanov’s work has been preserved a little.