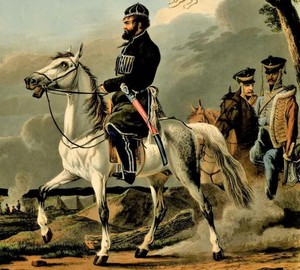 The hero of the Patriotic War of 1812 Denis Davydov is an almost legendary person. Gusar, the leader of the partisan movement, famous for his courage, remoteness and extraordinary luck in many daring sorties on the enemy, he was repeatedly captured on portraits made in various techniques.

Orlovsky’s work is a lithography depicting a hussar in a traditional technique for an artist. The central part is Denis Davydov riding a white horse in apples. He is wearing a black Cossack and a yarmulke on his side of the saber in bright spectacular scabbard. Two gusars on a bay and a hollow horse follow Davydov in dust clubs, and on the other hand, a broken bivak with white tents and burning bonfires is visible against the background.

An additional detail that fits into the overall style of the picture is a partially visible tree behind a pair of hussars, broken at the top, with dry and still living branches.

There are no too bright color spots in this picture, light muffled colors in pastel gamut prevail in it, although the hussar costumes are quite saturated and decorated with golden halon, sewing and fur conduit. The black outfit of Davydov and his white and gray horse clearly loom against the background of a gray-blue sky with olive clouds, which almost completely close it.

The hero is depicted in profile, his direct posture is emphasized by black Cossack, and the horse under it does not just go, but literally dances. This one is very beautiful and very reminiscent of the ceremonial portraits of military heroes and kings, characteristic of past centuries.

The canvas has a precisely verified composition, in which the level of view is very low. This allows you to present the figure of the main character more monumentally, as on a horse monument. She looks meaningful and impressive. On other portraits, Davydov is depicted near, fixed on his face, here we see the whole figure as a whole.