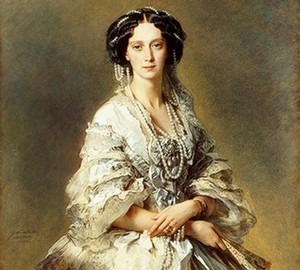 Portrait of Empress Maria Alexandrovna – Franz Xavier Winterhalter. 1857. Oil on canvas. 120×95
Franz Winterhalter, a German by birth, settled in Paris in 1834 and soon became a brilliant salon master. The court portrait painter of King Louis Philip, and then Emperor Napoleon III, he performed numerous orders of the Russian emperor and the St. Petersburg nobility.

Among the ermitage works of Winterhalter stands out “Portrait of Empress Maria Alexandrovna”, wife of Alexander II. She is depicted in a white air dress with ribbons on a gray-brown background. The artist carefully treated the transmission of the mother’s dress and thoroughly prescribed all the accessories and jewelry, so the thread of heavy pearls that intertwines dark hair, and the pearl brooch on the chest seems tangible. The pale painful features of the subtle face and the deep, sad look of unusually expressive blue eyes hint at the imperceptible disease of the empress. In 1880, Maria Alexandrovna died of tuberculosis.

The portrait was a great success, and subsequently many painters made copies of it.