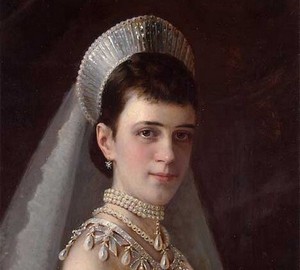 Russian painter and draftsman Ivan Nikolaevich Kramskaya (1837-1887) was comprehensively gifted. He worked as a master of genre, historical and portrait painting, was a prominent artistic critic. Studying at the Imperial Academy of Arts, Kramskoy led the “Bunt of Fourteen” artists who refused to write graduation work on the topic of Scandinavian mythology and asked to choose a topic on their own. The talent of the Kram portrait painter was highly appreciated by the monastic persons. In the 1880s, he was ordered a portrait of Empress Maria Fedorovna, wife of Alexander III .

A magnificent ceremonial portrait shows a still rather young, fragile empress in a pearl shot. Delightful jewelry does not overshadow the finely prescribed strong-willed face of the ruler, who fell on the years of family happiness, and the terrible upheavals associated with the death of children and grandchildren in revolutionary times.