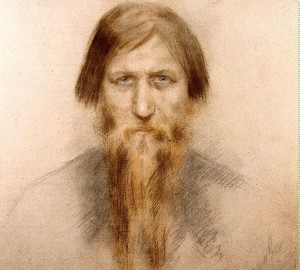 Portrait of G. E. Rasputina – Elena Nikandrovna Klokacheva. 1914. Cardboard gray, colored pencil, pastel. 81.5×56
Little is known about the author of the work – Elena Nikandrovna Klokacheva (1871 – after 1915): she studied at the Imperial Academy of Arts, after which she received the title of artist. Her legacy is known mainly due to the portrait of the “old man”, Grigory Efimovich Rasputin.

Rasputin, who came from the peasants of the Tobolsk province, had unlimited influence on Empress Alexander Fedorovna and Nicholas II, since he, possessing the power of suggestion, could only alleviate the suffering of the heir – Tsesarevich Aleksey. Rasputin’s rampant lifestyle discredited the imperial family, helped reduce its popularity among subjects, and Rasputin’s interference in state affairs led to a conspiracy against him and he was killed on the night of December 18, 1916.

In addition to artistic value, the graphic portrait of Klocacheva’s work is a rare documentary evidence of the era, because the appearance of Rasputin is known mainly from photographs.