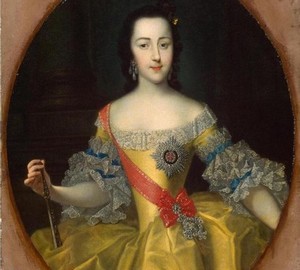 Portrait of Grand Princess Catherine Alekseevna – Georg Christopher Groot. Around 1745. Oil on canvas. 105×85
German master Georg Groog (1716-1749), who worked a lot in Russia, lived only 33 years, but managed to capture some of the imperial court and Russian nobility on his canvases. The oval portrait depicts 16-year-old Catherine Alekseevna, the future empress Catherine II, in a bright satin dress with red moire tape and signs of the Order of St. Catherine, established by her predecessor-heat. In the elongated face of the model, only a subtle hint of that amazing charm, which, according to contemporaries, distinguished Catherine II, is guessed. The dark background, chosen by the painter, contrasts perfectly, emphasizing marble skin and a light lemon-yellow dress with a tightened corset. A calm, judicious person with closed lips expresses the decisive nature that the ruler of the Russian Empire possessed.