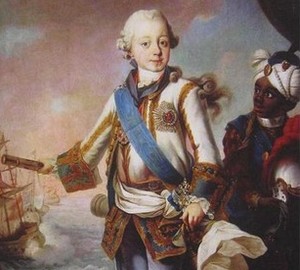 Portrait of Grand Duke Pavel Petrovich – Stefano Torelli. 1765. Oil on canvas. 176×107
The representative of Rossika, Italian painter Stefano Torelli (1712-1784), worked hard and successfully in Russia in the second half of the 18th century. Torelli is a master of the light and elegant court style of Rococo, who often used various allegories in his works.

The portrait of Pavel Petrovich belongs to representative ceremonial portraits. The young Grand Duke is placed in a certain conditional theater environment, where he is the main character. With an imperative gesture, he points to the stormy sea in which ships fight the winds – the glorification of future sea victories. A smart little-haired servant, almost bowing, brings him a helmet with a pen as a military leader. A white military suit, embroidered with gold, twists, sighing under a gusty wind, but nothing overshadows the calm, concentrated face of the Grand Duke.