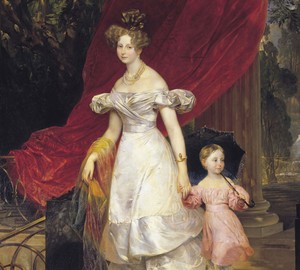 Elena Pavlovna, the nee princess of Württemberg, and subsequently the wife of the fourth son of Paul I, Grand Duke Michael, was heard by a very educated woman, as well as a philanthropist and public figure.

But besides this, she is also a lovely woman, sophisticated, majestic and noble. That is what Karl Pavlovich Brullov portrayed, at that time still a novice portrait painter, a recent graduate of the Academy of Arts.

The Grand Duchess, at the time of her journey through Italy and, being in Rome in 1828, ordered Brullov his portrait in full growth. The artist carefully approached the work, he had many sketches, sketches and ideas – how best to portray a character, how more profitable it is to emphasize the pose, which compositional decision to choose.

Showing Elena Pavlovna in motion was the best decision of the young artist and which he later often used.

A young woman goes down the stairs with her eldest daughter Maria, a small, angelic, fragile creature. The princess’s face is aristocratic almost impartial, which you can’t say about Maria – it is childishly cute, surprised, interested in something fascinating aside. But the princess, holding the girl by the handle, carries her down.

The author conveys the dynamics of the composition using spectacular overflows and the gloss of the satin dress of the Grand Princess, the folds of the fluttering bake of the girl’s light dress.

A beautifully draped red background, wonderfully picked by Brullov, shades the face and beautiful figure of a woman walking down the marble steps. And with the background for lovely Maria, the author chose a blue miniature umbrella, which smoothes the shattered face with its cold tone and contrasts with a tender pink dress.

A beautifully executed portrait of the Grand Duchess is a confirmation of the brilliant skill of the best painter of the academic direction – Karl Brullova.