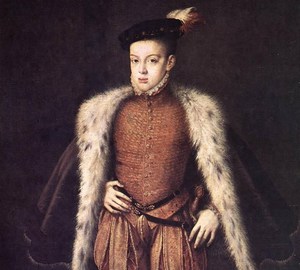 Sanchez Coelho is a Spanish painter, Portuguese by birth, founder of the Spanish national portrait school, influenced by mannerism. Since 1557, Coelho was the court artist of Philip II. Spanish researchers call Coelho “a gray master” – he perfectly conveyed color gradations, perfectly owned the gamma of gray and silver tones. One of the greatest finds in Spanish painting is the technique he developed to use a neutral gray background instead of the landscape and interior, taken in Italian Renaissance portraits.

Against a neutral background of the canvas is depicted by Prince Carlos, heir to the Spanish throne, son of Philip II and his first wife, Manuela of Portugal. Coelho strongly idealizes the appearance of a prince who was born with serious physical deformities. A cloak thrown over a camisole, shaped by a lynx of lynx, and a frontal pose allowed the artist to mask the bodily flaws of the model.