Portrait of Johann Friedrich the Magnanimous, Lucas Kranach the Elder, 1509 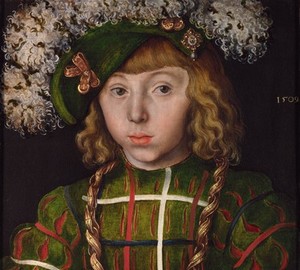 Lucas Kranakh the Elder (1472-1553) (Lukas 3ünder, who took as his last name the name of his hometown, which was called Kranakh in those days) – German painter and Renaissance graph, master of the portrait, genre and biblical compositions, court painter of Saxon Kurfürsts, supporter of the ideas of the Reformation and friend.

The presented portrait depicts the eldest son of the Elector of Saxon Johann the Hard, Johann Friedrich, who later received the nickname Generous. He became a Saxon Elector in 1532 after the death of his father. The artist was in the service at court and was the educator of Johann Friedrich. On this portrait, the heir is only six years old, a boy with lush hair and a pretty face looks like a girl.

This work is paired to the portrait of the father (both paintings are exhibited in the National Gallery). However, this ratio of images of father and son is unusual. As a rule, portraits of representatives of one generation, for example spouses or brothers, were created by doubles; instead of a son, the wife of Johann the Hard and the mother of Johann Friedrich the Generous Sophia of Mecklenburg should have been captured.

After more than 20 years, Kranakh will write several more portraits of the Elector and remain faithful to him, even when he is in disgrace with Emperor Charles V. However, in his later works it is no longer possible to recognize that six-year-old boy.